Alford Silver Band’s free concert for the town at the Corn Exchange last Saturday (26th March) proved to be another huge success for the popular band.

“We can’t call it a sell out because it was free entrance,” chuckled band chairman Martin Briggs, “but there was a full crowd and standing room only left at the back.”

Under the baton of talented musical director Steve Walker, the band played a challenging and varied programme to thank the people of Alford for their support. Starting with a Sousa march, they progressed through Rossini’s Italian in Algiers and Strauss’s Thunder and Lightning Polka into a variety of modern numbers that included the jazz classic Harlem Nocturne, Herbie’ Flowers beautiful Carillon featuring the talented horn section of the band, and Bert Kaempfert’s Swinging Safari.

Derek Ashmore’s beautiful arrangement of the love song By the Time I get to Phoenix was given its debut with the band, played as a flugel horn solo by Mike Green.

The band’s young training section also played six pieces that had been specially written or arranged for them to demonstrate their own emerging talent as musicians.

And the band’s finale of the lively Russian number Kalinka, followed by Hootenanny, a medley of lively American folk songs in which each featured section of the band stood to play in turn, and which culminated with the entire band on it’s feet, had the audience clapping along and calling for more. 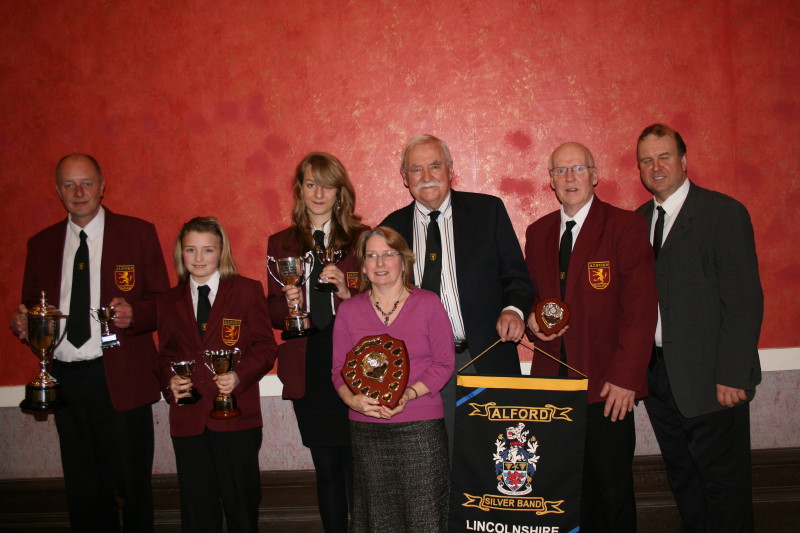 The band took the occasion to honour its own members. Richard Walker received an award for his role in standing in as conductor when musical director Steve Walker (no relation) is absent on other duties. Lydia Tagg was recognised as the most improved player. Husband and wife team Alex and Jane Taylor shared an award to recognise their behind the scenes work as band librarian and secretary respectively. And Alisha Bassham was awarded the Margaret Sutton Trophy for her outstanding dedication as a junior band player.