A covering of snow and a biting winter wind did not deter followers of Alford Silver Band from crowding into Alford’s Corn Exchange on Saturday evening (23 March) for the band’s ironically-styled ‘Spring’ concert.

The evening was introduced by the band’s president, Margaret Sutton who started proceedings by unveiling a beautiful, hand crafted conductor’s stand that had been dedicated to the memory of the previous president, the late Tom Porter. Margaret also informed the audience of plans to extend the band’s rehearsal centre to accommodate the growing number of young players joining the popular band.

Musical director Steve Walker was on top form as he led the band through a technically challenging and varied programme, interspersed with his usual brand of humorous quips and jokes that had both the audience and the band laughing and groaning alternately.

Brilliant solo performances were given by Bev Burton (tenor horn) who played Saint-Saens The Swan from The Carnival of Animals, Josh Wilkinson (principal cornet) playing Ray Woodfield’s Latin Seranade, and Richard Walker (trombone) who played a tricky arrangement by Philip Sparke of the famous George Formby hit, Leaning on a Lamp-Post.

The band’s youthful training section demonstrated their prowess with a cameo performance, entertaining the audience with four pieces, including a movement of Eric Ball’s Indian Summer, once used as a ‘test’ piece for brass band contests, and an arrangement of Edvard Grieg’s In the Hall of the Mountain King.

“Winter weather is always a worry for us,” confided band chairman Martin Briggs. “Not only can it be difficult for some of the players who live in outlying areas to get to the venue, but it’s always a temptation for the audience to stay at home in front of a roaring fire, rather than to venture out. But the Corn Exchange was full as usual, which is testament to the professional level that the band has attained under Steve Walker.”

The band’s next two performances will not be in public. The band has been engaged to perform during a wedding ceremony, and the following day will entertain civic dignitaries following Chapel St Leonards civic service. 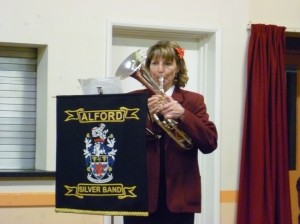 But the band will be back playing in public at Tower Gardens, Skegness on Sunday 28th April.