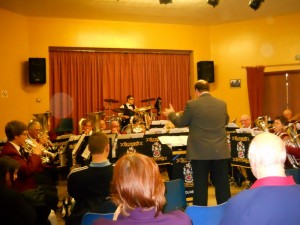 Despite the short notice for the concert, the Village Hall was almost full to capacity once more for this very popular band.

Musical director Steve Walker had again put together a programme that was both varied and entertaining.  Classics such as Rossini’s L’Italiana in Algeri and Thunder and Lightning Polka by Johann Strauss were interspersed with music from the movies and other modern classics, and Steve‘s quips, usually at the band‘s expense, ensured plenty of laughter.

Gifted young percussionist Lewis Knight, who enjoys an enthusiastic following at Chapel, performed another stunning solo during the band’s rendition of a medley from Disney’s High School Musical, with the audience invited to join in with the shouted vocals.

The band finished with a lively arrangement of a medley of American folksongs entitled Hootenanny, in which the various sections of the band stood to perform their own solo passages, culminating with the entire band standing to play Down by the Riverside, the audience clapping along.

“It was another great night,” said Village Hall chairman Christine Lewry. “We love having the band here. They are great entertainment. We look forward to their next visit.”