Alford Silver Band recognised the achievements of four of its own members during the recent Spring concert at Alford’s Corn Exchange.

Cornet player Tina Wood received the Harry Farnsworth Memorial Cup for ‘Bandsmanship’ for her unstinting efforts behind the scenes.

“As well as being a reliable and talented player, and serving on the band’s management committee, Tina has taken on extra duties this year that have had a significant impact upon the band,“ commented band chairman Martin Briggs as he presented the award. “She arranged the purchase of replacement band uniforms as well as leading on the design and construction of the new conductor’s stand, dedicated to our former president, the late Tom Porter. Without Tina, these things wouldn’t have happened. And she managed to do all this as well as being a school teacher and looking after her young son. She really has earned this award”

Sky TV weather presenter Jo Wheeler won the Edward Robinson Cup for the most progress made by a player, which was presented by the band’s vice president, Mrs Cecile Large.

Martin explained that Jo had never played a brass instrument before she was recruited to the training band in January 2012. But just 14 months later, she is a valuable member of the horn section in the full band.

“Jo is an inspiration to anyone taking up a musical instrument in adult life,” he said. “She has made an amazing amount of progress in a really short space of time, in spite of her busy role with Sky TV. She is proof that it is never to late to learn to play an instrument.”

The Sally Walker Shield, presented by band member Jim Walker in memory of his late wife is the band’s “players’ player of the year” award, the recipient being chosen by the full band membership through a secret ballot.

Unfortunately, this year’s recipient, bandmaster Alan Waite was taken ill the day before the awards ceremony and was unable to attend. Band chairman Martin Briggs accepted it on his behalf. 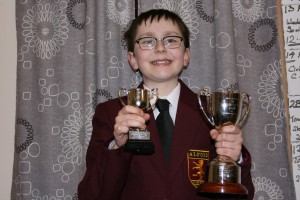 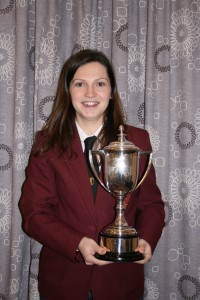 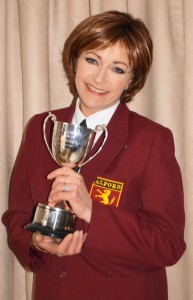 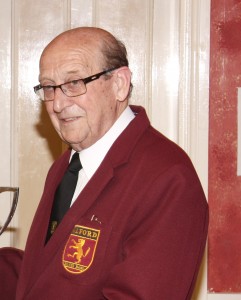