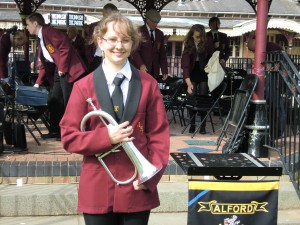 Alford Silver Band said “auf wiedersehen” this week to one of its newer members as she prepares to return home to Germany.

Denise Heckmann, from Kassel, Germany has been in Lincolnshire since October, working as an exchange teaching assistant at Queen Elizabeth’s Grammar Academy in Alford.

An able musician back home, Denise brought her talents to the town’s band, where she was made very welcome.

“Denise has been a great asset to the band, both as a player and as a personality,” commented band chairman Martin Briggs. “She has made lots of friends here and we are really going to miss her. Though as she is such a chatty lady, perhaps the band room will be a little quieter,” he laughed.

Denise has been playing flugel horn with the band. Principal flugel Mike Green said that Denise would be sadly missed. “Denise is a very accurate player,” he said. “I could always rely on her to put in all the black notes in the fast and difficult pieces. It took a tremendous load off me,” he chuckled.

As well as the flugel horn, Denise is a gifted saxophonist, but has been unable to find time to exercise that talent with a band whilst she has been here. But she has helped out Alford’s neighbours Skegness Silver Band, playing the cornet for them in the Midlands regional contest in March.

The Alford band held a party in Denise’s honour in the band room on Sunday at which several members of the Skegness band attended.

But it will not be the last that the Alford band sees of Denise. She intends to return to Britain to holiday with her friend in July, and hopes to come and see the band perform at their concert in Chapel St Leonards Village Hall on Thursday 21st July.

“You never know,” said Martin, “we may even persuade her to bring her flugel and join us on the stage.”