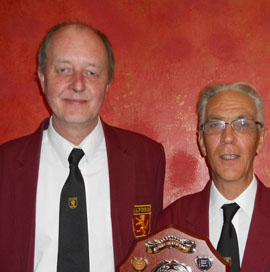 Despite a clash with another local event, Alford’s Corn Exchange was packed out on the evening of Saturday 15 March  as the popular Alford Silver Band celebrated its players’ successes with another enthralling concert.

Led by musical director Steve Walker the band delighted the audience with numbers ranging from Offenbach’s Overture from Orpheus in the Underworld (featuring the famous Can Can dance) to Madness’s Baggy Trousers. With Steve Walker’s humorous commentary that had the audience alternately groaning and crying with laughter, the theme to the film Chicken Run, complete with kazoos and whistling cornet players proved to be a fitting finale to the performance.

The band’s reputation for excellent entertainment continues to spread far and wide, with members of the audience coming from as far away as Mareham-le-Fen to hear the band.

The band also took the opportunity to recognise its own members and celebrate their achievements.

Band chairman and cornet player Martin Briggs was voted by the membership as the ‘Player Personality’ of the year for his outstanding work in steering the building of the much needed extension to the band’s rehearsal centre. He was presented with the Sally Walker Shield, dedicated to the memory of a former band member, by her son, trombonist Richard Walker.

“Martin spent hours of his time in the role of ‘clerk of works’ to make sure that everything came together properly,” band vice chairman Mike Green told the audience. “Without him, the extension would not have happened.”

Martin’s grandson, cornet player Michael Briggs (who was unable to be at the concert due to a prior commitment with the Army Cadets) was awarded the Harry Farnsworth Cup for ‘bandsmanship’ for all the work he had done throughout the year ‘behind the scenes’.

“Michael is always there to do the hard, dirty jobs that need doing around the band‘s rehearsal centre,” commented Mike, “whether it’s mowing the grass, or cutting back the bushes. And during the building extension work, he really proved his worth, taking up the old carpet and cleaning down paintwork, and even scrabbling in the loft to check the depth of the insulation.

“Michael does everything asked of him,” he continued, “and does it all without complaint. He’s the sort of young man that every organisation needs behind the scenes.”

The award of the Edward Robinson Cup for musical progress was made by the band’s vice president, Cecile Large, who donated the cup in memory of her late father, a former President of the band.

This year’s recipient was retired teacher Carol Goulden who only took up playing a brass instrument after having been inspired by the band as a member of its audience only 15 months ago.

“Carol has made incredible progress,” said Mike, “moving very quickly through the training band, and is now a key member of the cornet section of the main band. She is an inspiration to anyone who wants to learn a musical instrument in their more mature years.”

11 year old cornet player Phoebe Willey was awarded the Margaret Sutton Cup for her commitment and dedication to the training band, presented by the band’s President, Margaret Sutton.

“Phoebe not only regularly attends the training band rehearsals,” continued Mike, “but she practices for many hours to ensure that she continues to improve.”

Phoebe is one of four young players in the training band who have recently passed their grade 3 music examinations as a result of the tuition given to them by Steve Walker. 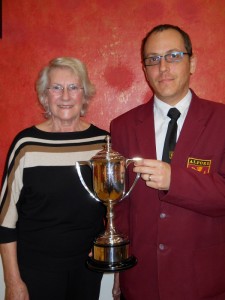 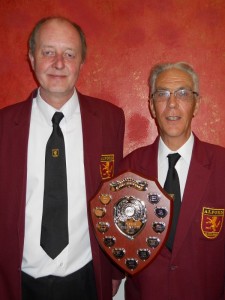 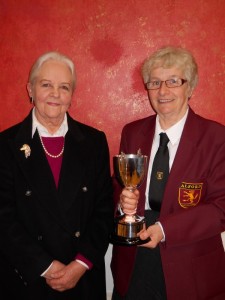 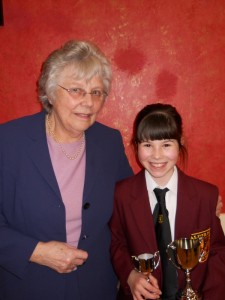 The young members of the training section showed off their talent with a cameo performance during the concert.